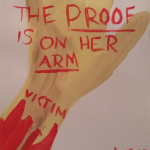 Trigger Warning: Art involving themes of sexual assault and self-harm.
A painting i made while thinking about how NOBODY FUCKING BELIEVED THAT I WAS RAPED BECAUSE PEOPLE IN AUTHORITY NEEDED PROOF…

i am the perfect target
daylight sparkling off my teeth as i laugh too loud, sing too deep, be too much…

I have pretty much always identified as female. Cis-gender. I have never thought about anything else, really. I have never been aware that there are other options out there, much less considered them. But I’ve also been on the tomboy side of female, right from the get-go. I hung out with boys, I beat up boys, I followed boys into the bathroom and watched them pee. I really really wanted a penis, and I tried as hard as I could to grow one. I remember when I was little I’d sit in the passenger seat of the car as I went with one of my parents on an errand-running mission, and I would feel a certain friction between my legs or against my groin from the way I was sitting on the seat, the way the seatbelt fit or my pants were tugging, and imagine a penis growing between my legs.